On September 25 to 28, 2018, the PolidEU project work group organised a contest in language teaching skills aimed at fostering intercultural competence. The contest became a kind of result of students’ work in the framework of the Erasmus + project in 2016-2017 academic year.

6 students of the 4th year of the faculty of the Romance and Germanic philology participated in the contest (field of studies "Theory and Methods of Teaching Foreign Languages and Cultures"). The contest was held during their practicum at the gymnasium named after I.S. Nikitin and gymnasium No. 2 in Voronezh.

As part of the competition, students independently developed a French language lesson plan aimed at fostering intercultural competence. The subjects of the lessons turned out to be very diverse: sports, school life, French in the world, rules for intercultural communication. Then the students conducted lessons with students of gymnasiums.

The jury, which included the members of the working group of the PolidEU project and the staff of the French Philology department, announced the results: 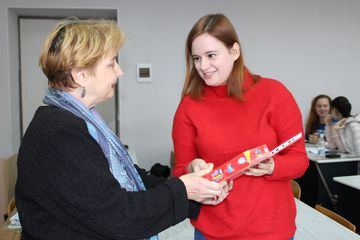 All participants received certificates, and the winners were awarded certificates and books on the methodology of teaching French. The lesson plans of the winners of the contest are published in the 2nd issue of the collection of scientific papers "Taking into account students’ identity during foreign language lessons" (Voronezh, VSU Publishing House, 2017).