On 22-29 October 2016 the students of the French philology department participating in the project Jean Monnet PolidEU worked on the Module 3 "Institutions of the European Union" (Institutions européennes). The module was designed to get students acquainted with the functioning and structure of the main EU institutions.

The lecture was held by PhD., head of the Center for International Projects and Programs Alla Akulshina. The lecture highlighted the principles of the European institutions functioning (European Parliament, European Commission, Council of Europe) and personalities of the Heads of these institutions. 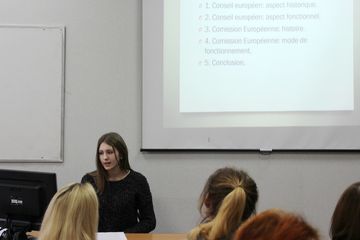