From October, the 15th the participants of the PolidEU project began their work on Module 2 "History of the European Union" (Histoire de la construction européenne) within the framework of Jean Monnet PolidEU project. During the lecture several topics were discussed: main stages of the European idea development and personalities who have contributed to it. In addition, the key stages of the European Union creation were presented (the creation of the first European Communities, main treaties and principles of functioning of the united European).

The following topics were covered by the students in their project work: 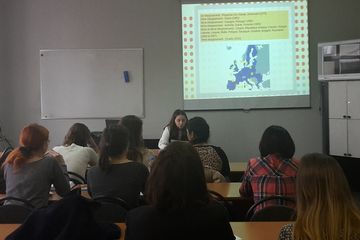