On June 13, 2017 in the framework of the Jean Monnet project PolidEU was held a meeting of students with a representative of the Chamber of Commerce and Industry of the Voronezh region V. Marenich. It was dedicated to taking into account identity in business relations between Russia and the EU.

V. Marenich has been working for a long time to strengthen trade and economic ties between the Voronezh Region and the partner countries of the EU, in particular France. He took an active part in developing cooperation with such brands as Leroy Merlin and Lessaffre. 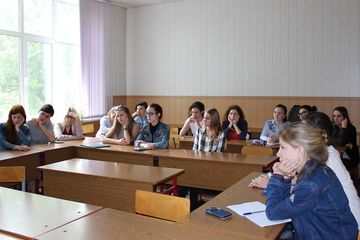 At the meeting with students, issues related to the correlation of European and national identity were discussed, specific examples of the manifestations of European identity in the business sphere were highlighted. V. Marenich also analyzed the role of pan-European cultural values in establishing relations between Russia and Europe.

At the end of the meeting, a discussion was held on the future of relations between Russia and the EU.