In the framework of the implementation of the Jean Monnet project 564786-EPP-1-2015-1-EN-EPPJMO-MODULE "European identity through the prism of the policy of the European Union" (Identité européenne à travers la politique de l’Union Européenne (politique linguistique, d’affaires, d’immigration) - PolidEU) the head of the project, the head of the department of French philology, professor Elena Alekseeva conducted a presentation of the project and a master class for teachers and students of the Pyatigorsk State University of the French, German and Spanish branches.

Elena Alexeeva spoke about the project’s goal - improving the professional competencies of students in Linguistics whose specialty is not directly related to the study of the European Union. Improvement of professional competencies is realised due via the introduction into the training program of in-depth study of the aspects of the functioning of the EU and issues of European identity. 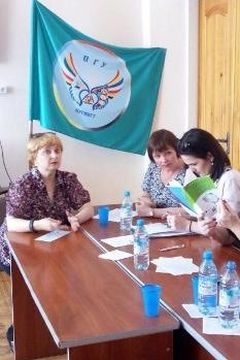 The students of the Pyatigorsk University were interested in the actions held within the framework of the Jean Monnet project for students of the VSU (participation in project activities, student conferences with the publication of collections of papers, simulation games), during which they have the opportunity to demonstrate their knowledge of the functioning of the EU and the professional skills of public speeches and discussions in foreign languages.

Teachers of the Pyatigorsk University were interested by the academic side of the project: the topics discussed during the classes, the organisation of the project work of students using the educational electronic platform Moodle, methods used to form professional competencies from the State Federal Standard during the classes. In order to show the mechanism of the project implementation, a master class was held on the use of the course book created by the members of the project work group Elena Alekseeva and Svetlana Bulgakova. The course book "European Identity through the Prism of the European Union Policy" is based on innovative approach, can be used in paper version and through the Moodle platform.

At the end of the presentation and the master class, it was agreed that during the next academic year the students and teachers of the Pyatigorsk University will take part in the project activities.